Cooking with Matthias Schmidt at the Genussakademie 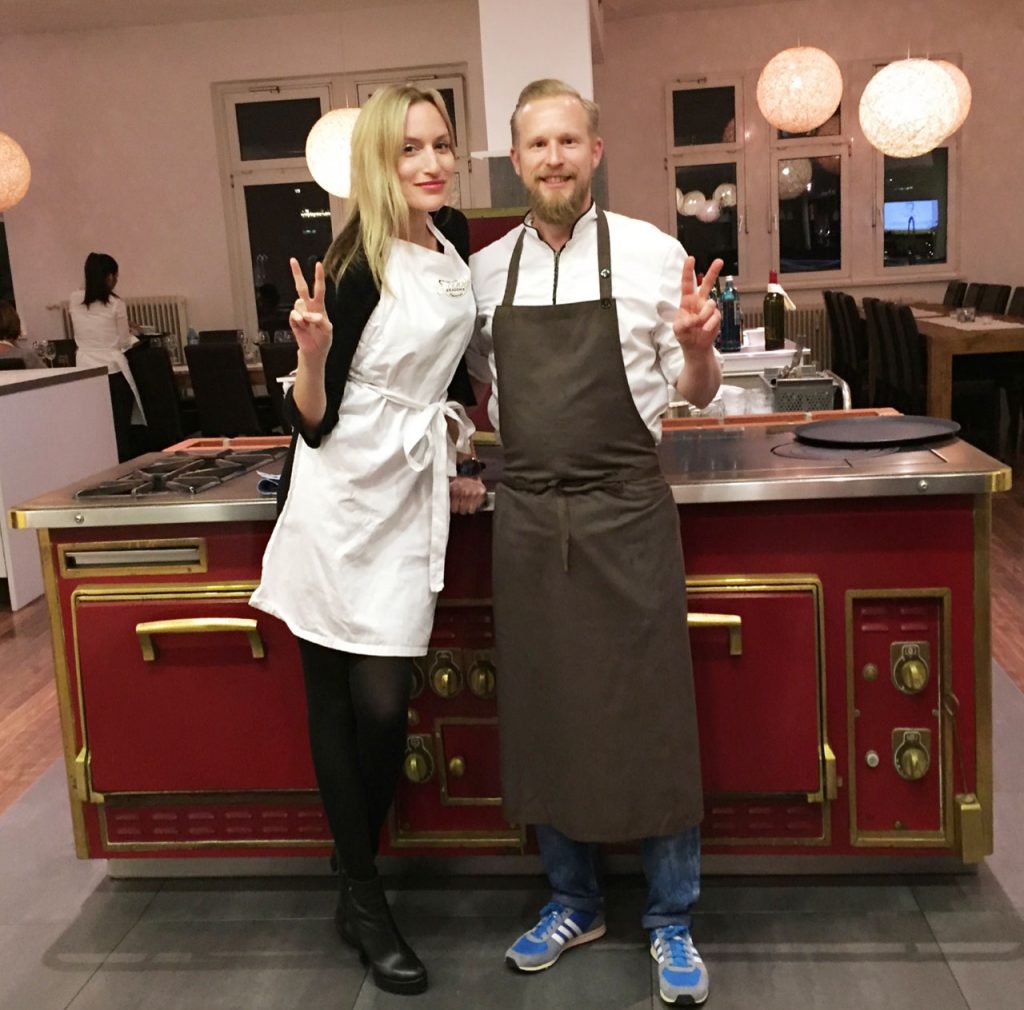 Cooking with Matthias Schmidt at the Genussakademie

The long-awaited day has finally arrived, and I was very excited about this evening’s wonderful activities. This cooking class was a present, which I gave to my best friend for his birthday. We were both very happy at the thought of cooking with a Michelin starred chef!

We made our way into the cold night and arrived at the Genussakademie on Ludwigstraße 33-37 right on time. I was already familiar with this beautiful location because I have been to quite a few Christmas parties here before. It’s a cool, big, loft space, which is a perfect place to cook, laugh, dance, eat, drink and have fun! It was a chilly Sunday evening, but that didn’t bother anyone, because it seemed like everyone was wearing a big and warm smile. We were a small group of about 15 hungry people.

The guests were greeted with a cold glass of champagne. Our well-known and beloved chef, Matthias Schmidt, was walking around the kitchen, preparing everything for our big cooking-jam-session. Matthias worked in a few 1 and 2 starred restaurants in Germany. When he came back to Frankfurt, he worked at the Villa Merton and was the head chef there since 2008. At the beginning, they had 1 Michelin star. Within the next years, Matthias and his team created a kitchen, which was based on the culture and products of our region. They used as many organic ingredients as possible, and in 2012, they got the second Michelin star!

We waited until everyone had arrived and the introductions were made. The people were relaxed, in a good mood and eagerly awaiting the big cooking bash. This was my first time participating at such an elaborate cooking class. The only time I ever took a cooking course before was at junior high, but unfortunately our team burned the teacher’s hair off! Horror of all horrors – she walked around with a crew cut the entire school year! I tried to avoid public heating elements ever since. But finally the time has arrived to brave the public stove once again!

After the first glass of bubbly and Matthias’s extensive information about our 4-course meal, it was time to start! Our menu was: Gebeizter Saibling, Schwarzwurzel, Short Rip and Grüner Hafer Eiscreme. It appeared like they were all cooking pros, because everyone seemed to know the techniques, tools and ingredients. Only I was staring at the fish skin like an alien, and didn’t know what to do with it. Matthias walked by, laughed, gave me scissors and told me to cut the skin in strips. After obediently cutting the dried fish skin, I decided to walk around the room and see if there was any trouble that I can cause. Unfortunately there were no chance for trouble, so I had to behave and follow Matthias’s cooking orders. I ended up cutting some long vegetable thingy, which I swear I have never seen before in my life! It was long, thin and very strange. Ze Germans call it “Schwarzwurzel”. After putting the komisch thingy into the oven, it was time to try the delicious white wine, standing in mass amounts of bottles on the counter.

Of course there was one Schlaumeier in the group, who seemed to know everything better than everyone else. She even tried telling Matthias how to do things better a few times. I couldn’t help but clasp my glass of wine in the background and laugh at the silliness of it. Who the hell tells a star chef how to cook?! There is a Besserwisser in every group and it wouldn’t be the same without her. When the good wine flows, even the showoffs can be pathetically amusing.

Our menu was quite fancy and delicious. I could probably reproduce the appetizer myself, but the main course was too complicated for me to repeat at home. Therefore I just eased into “eating-mode” and stepped away from my “trying-to-remember-and-doing-this-at-home-good-girl-cooking-mode”. I was super entertained at how my fish skins puffed up into tasty crunchy fish chips in the frying pan. I found the crispy fish skin to be the best tasting element of the appetizer, and many agreed with this. I was also pleasantly surprised that the Schwarzwurzel tasted this good, after all, it looked like a tree log at the beginning. After the third glass of wine, nobody was really cooking anymore except for Matthias and his team. All I can say is that the short ribs tasted absolutely amazing! I don’t think that I have ever eaten anything so soft, tender and juicy before. This officially makes Matthias Schmidt the new Meat Master in my books!

The sweetest part of the evening had arrived. Since I’m not so big on desserts, I took more meat instead of the ice cream. The men loved it and the ladies thought I was crazy. All in all, everyone was laughing, having a good time and I was happy to see that my friend was enjoying his birthday present. There were interesting stories rotating the tables and many funny jokes. Matthias and his team seemed to be enjoying the evening as well. I looked down at my watch and realized that we were cooking and eating for over 5 hours already! How incredibly fast the time flies by when you’re having fun.

The cooking lessons offered by the Genussakademie are perfect to attend as a couple, with friends, parents, siblings or even single! You will meet many new people and have tons of fun. I was pleasantly surprised to see how many different food categories, styles and chefs were on offer. The classes vary in time, location and price, so there is something for everyone. There are lots of different foods and delicious dishes to try, and you might even leave at the end of the evening with a new recipe or two – that is if you still remember it after all the bottles of wine. Try it, enjoy it and bon appétit! 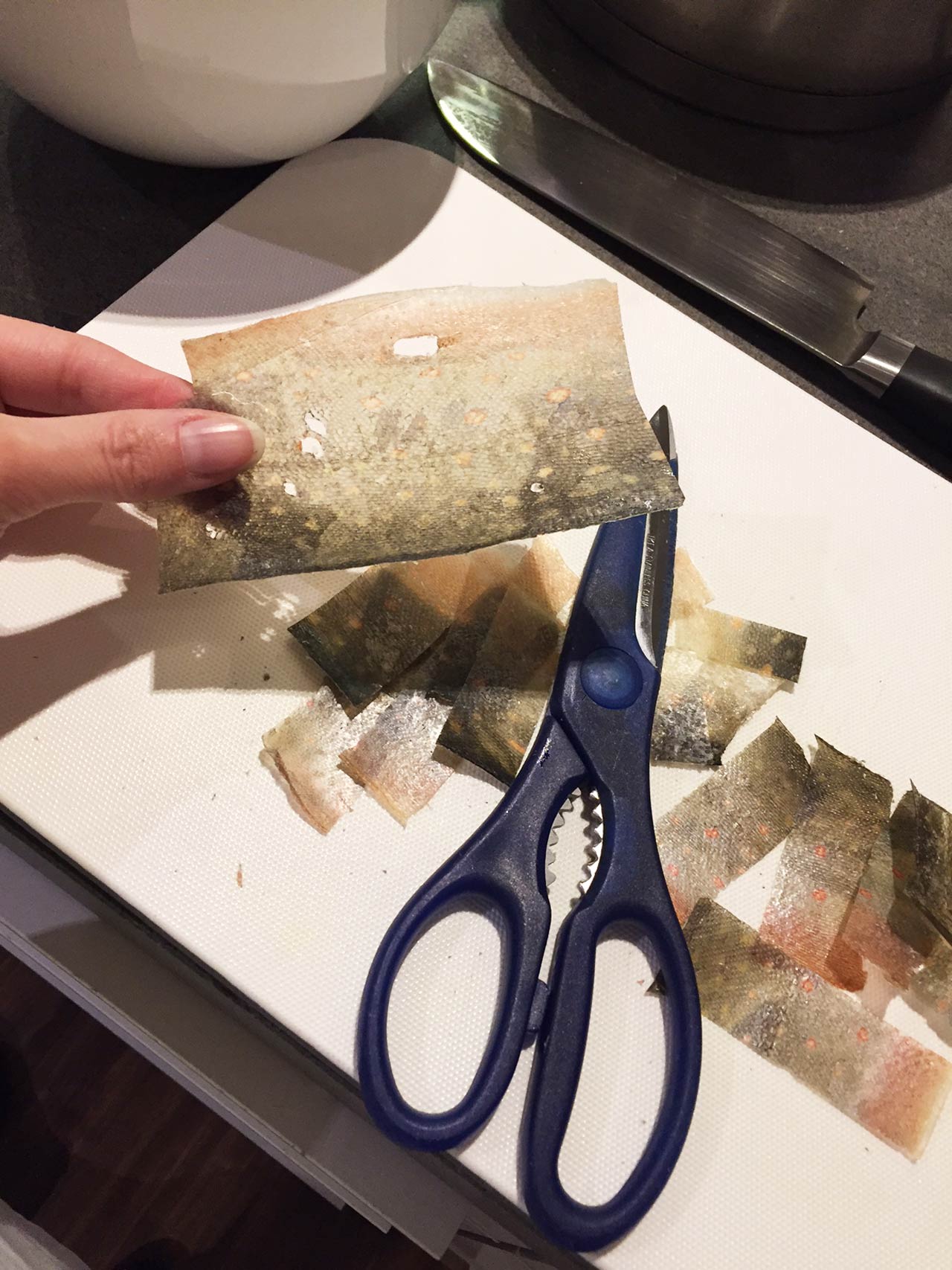 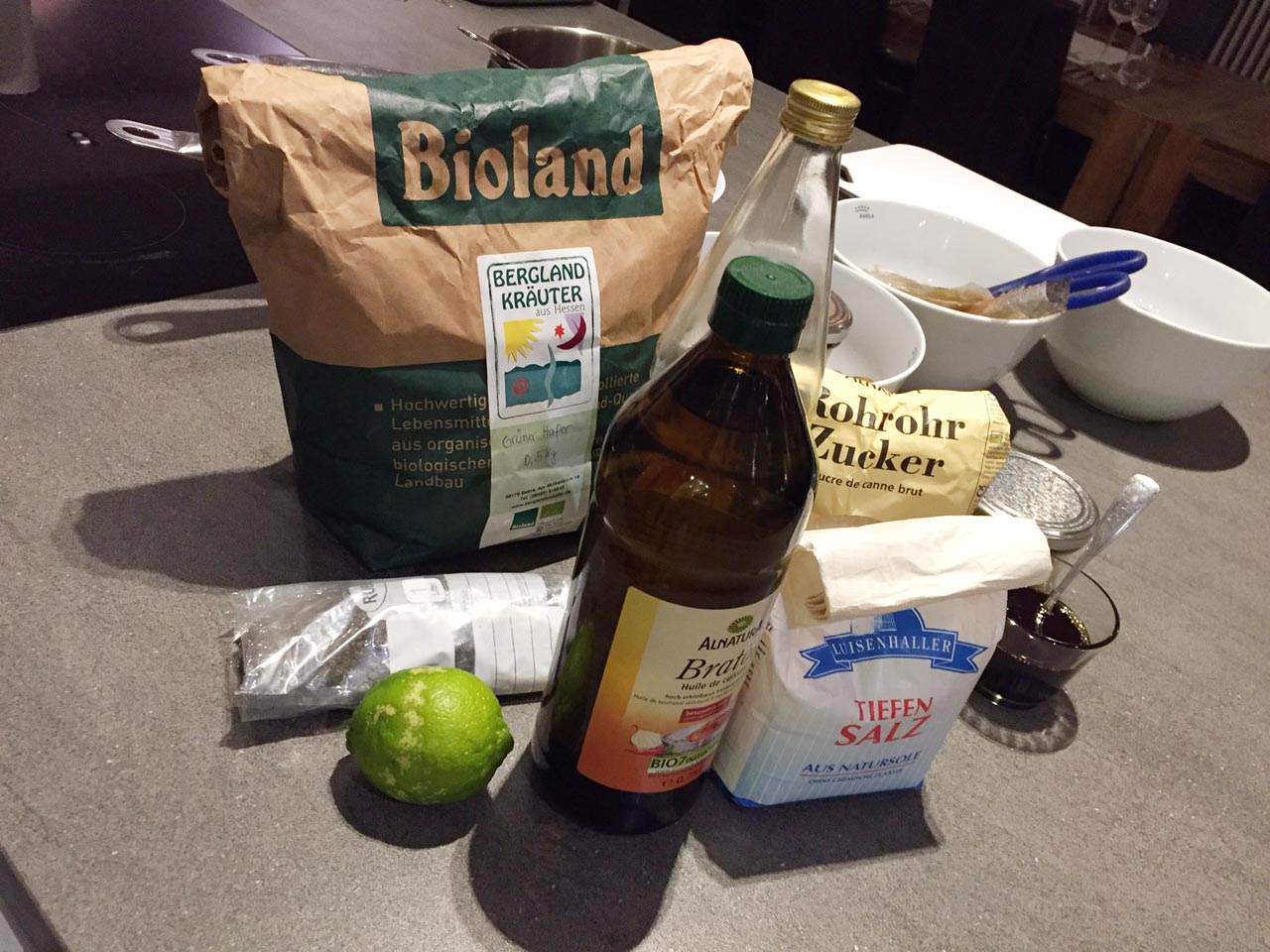 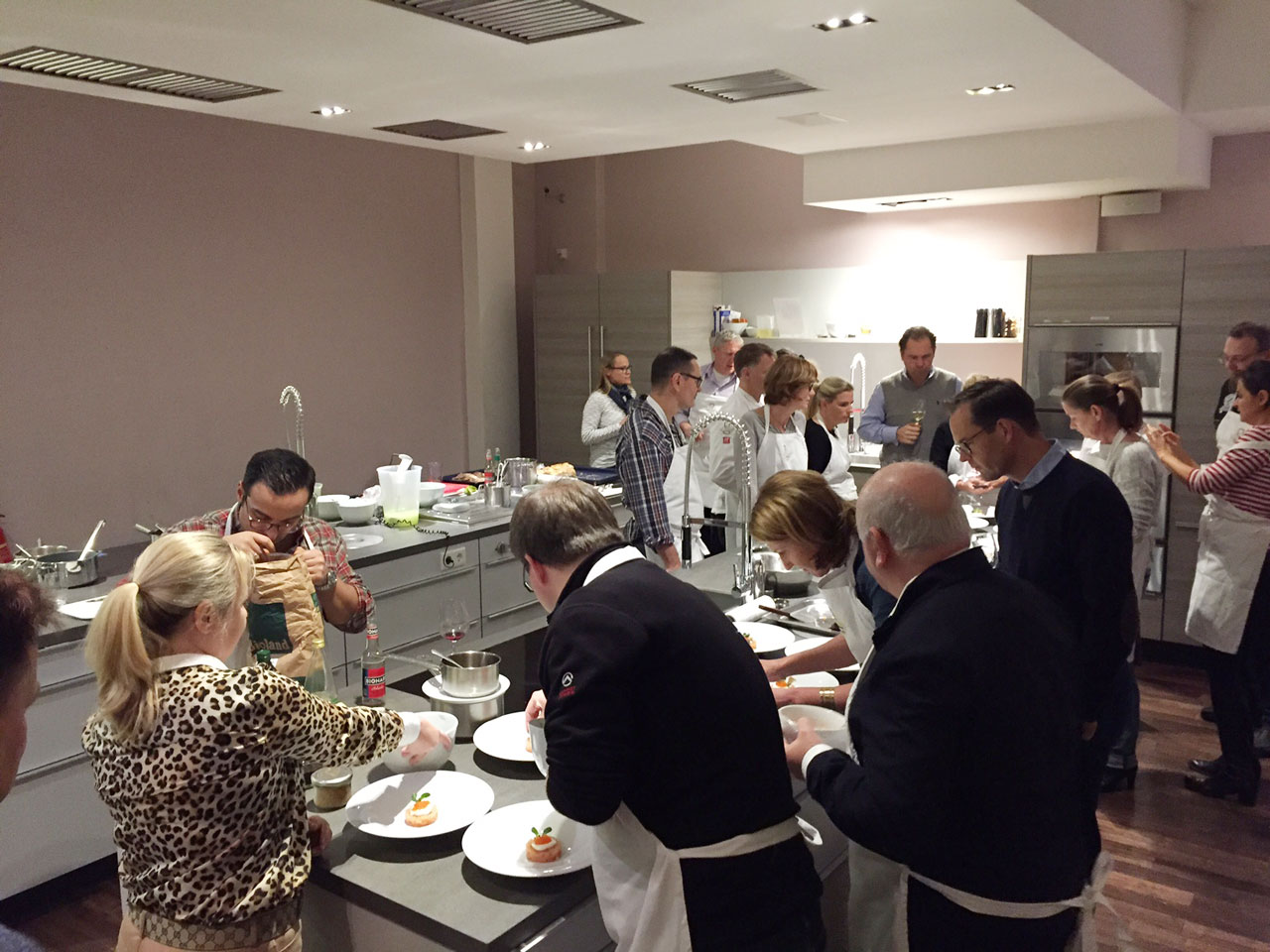 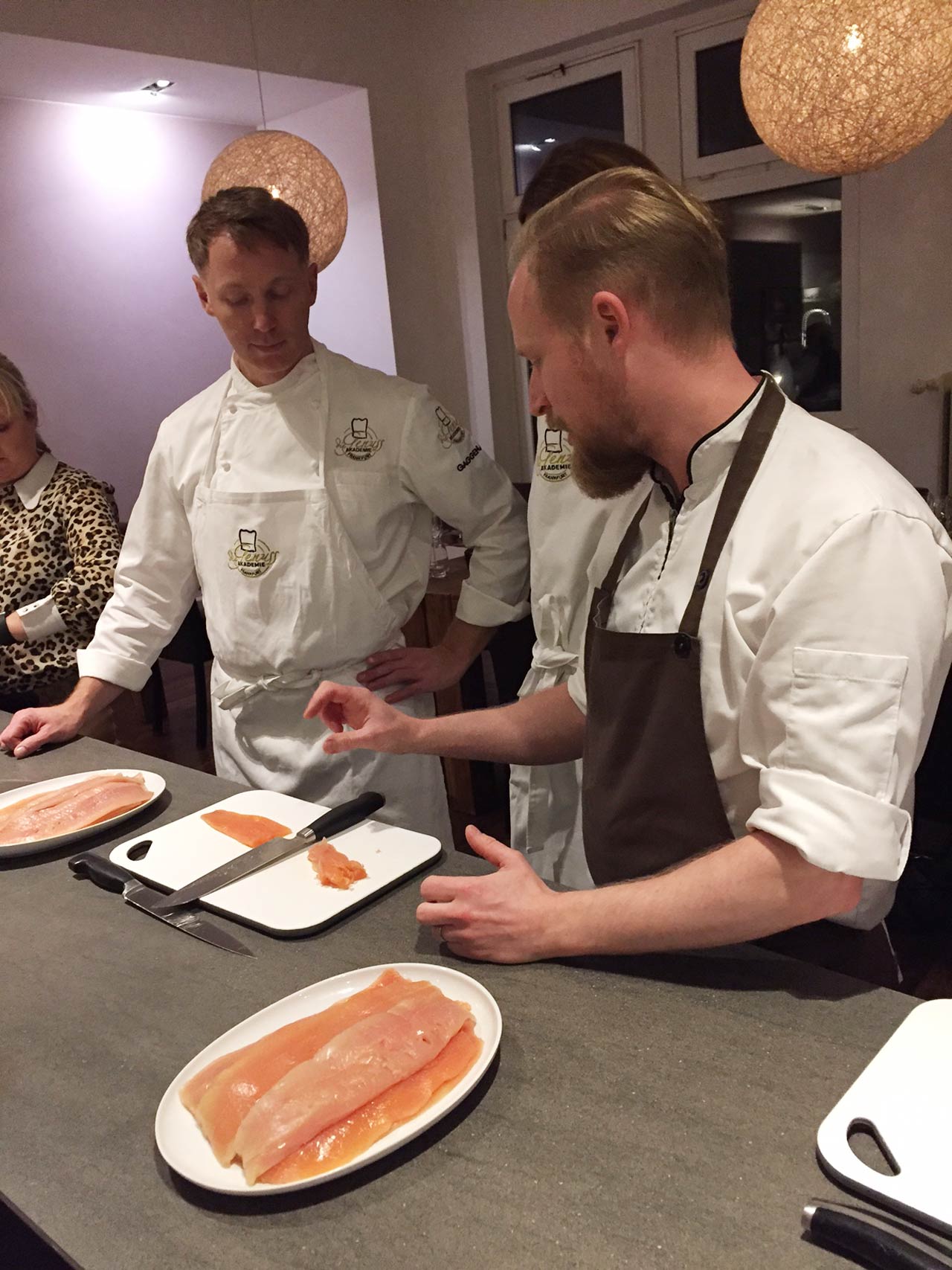 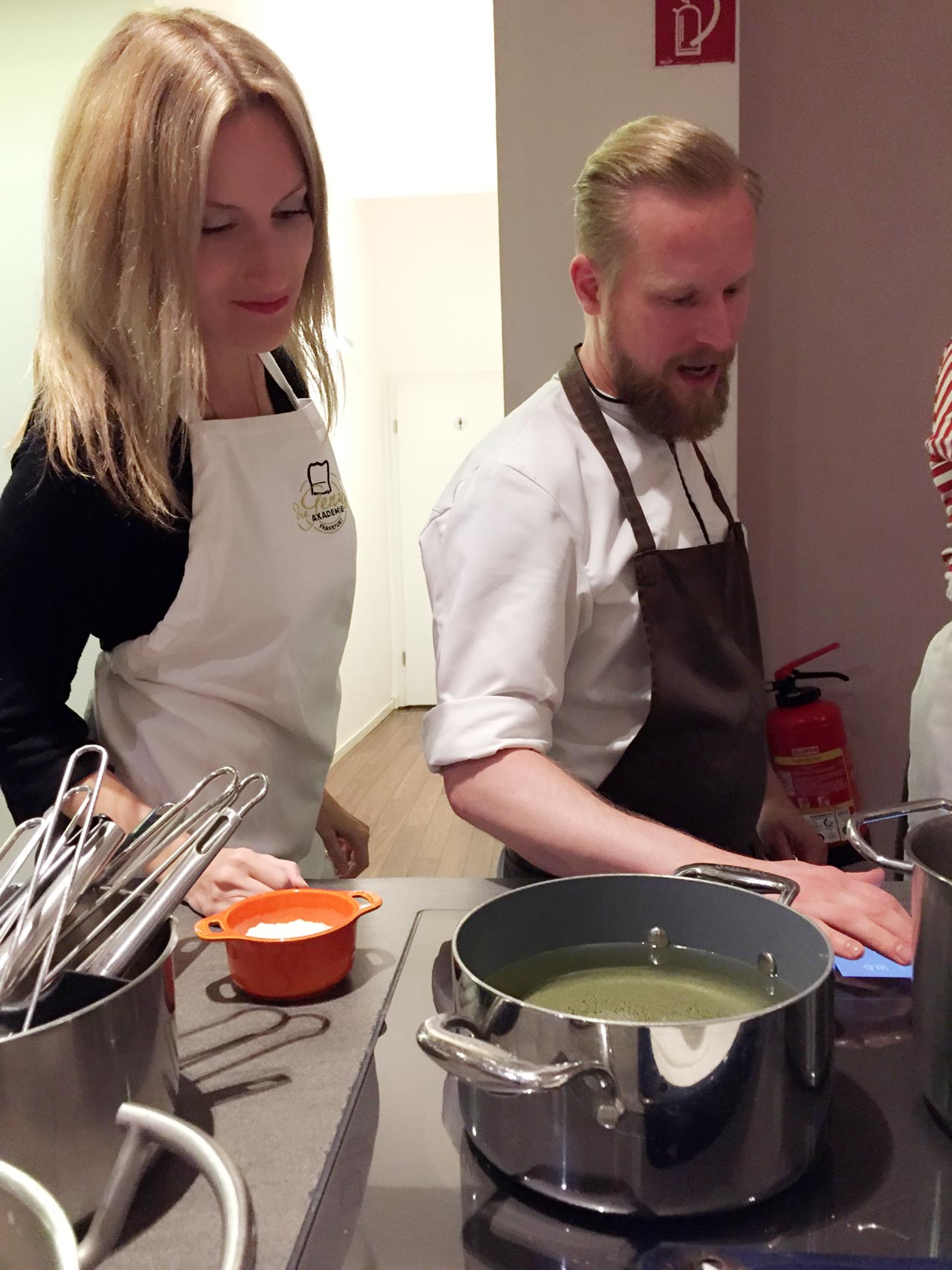 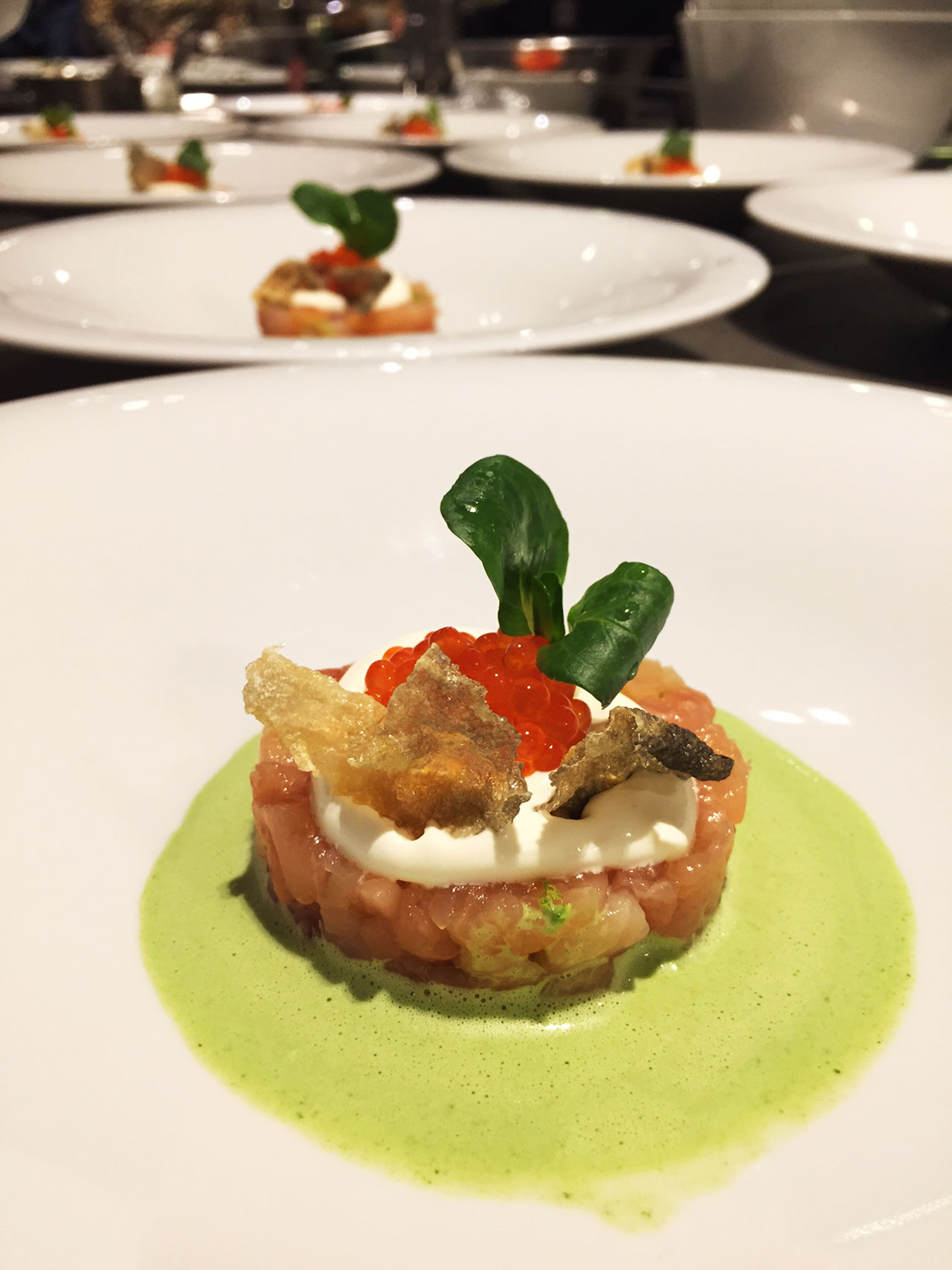 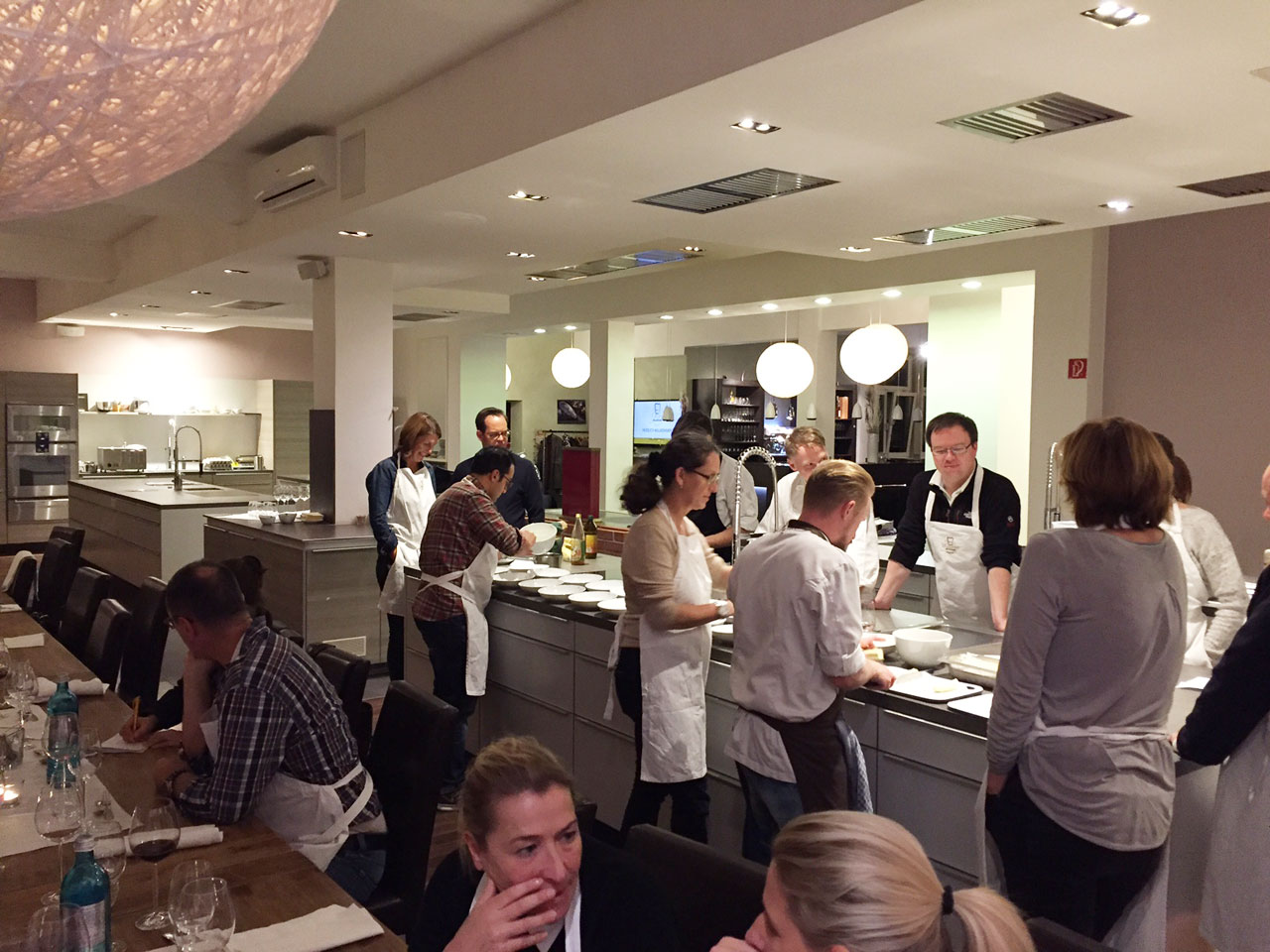 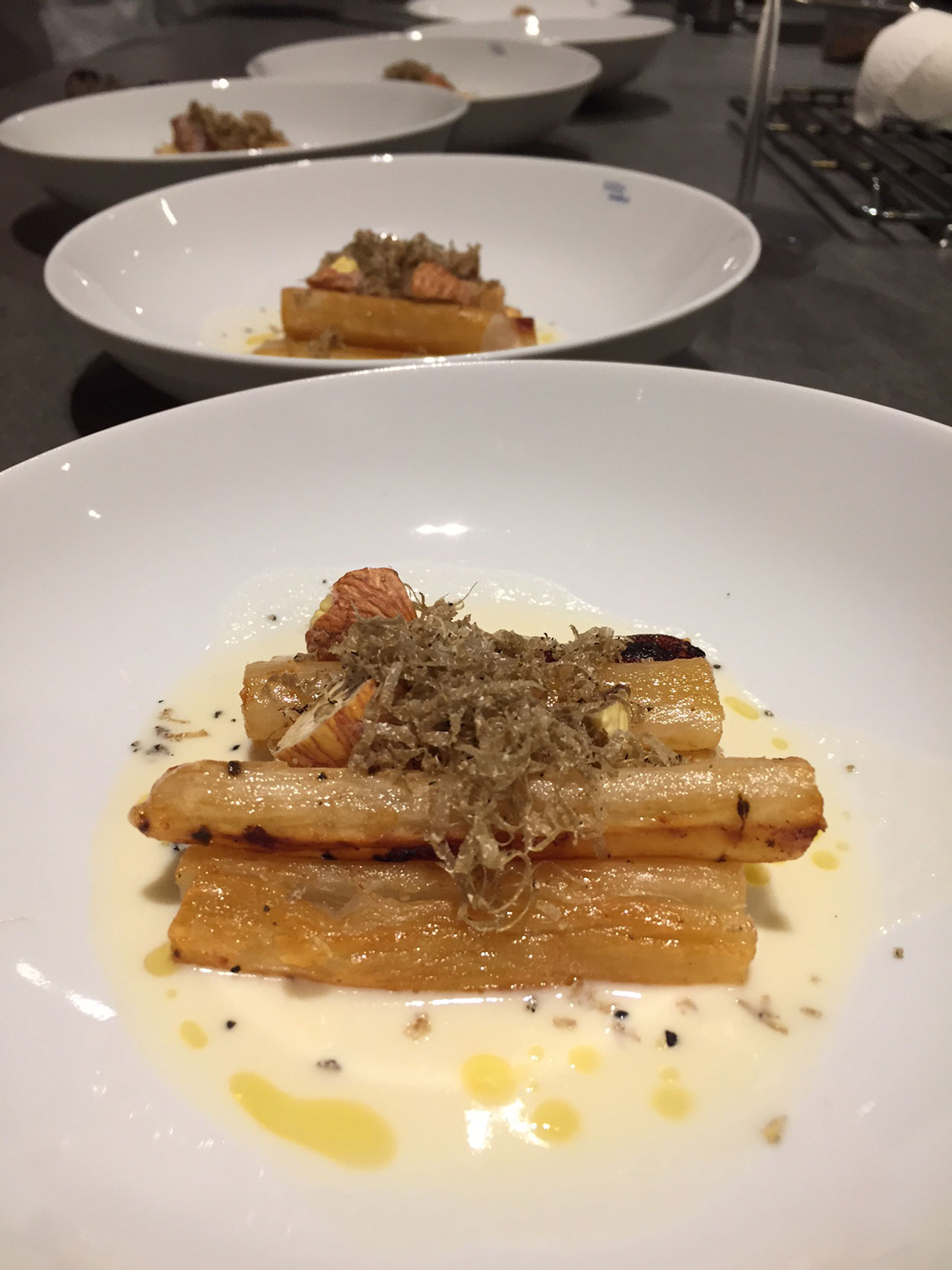 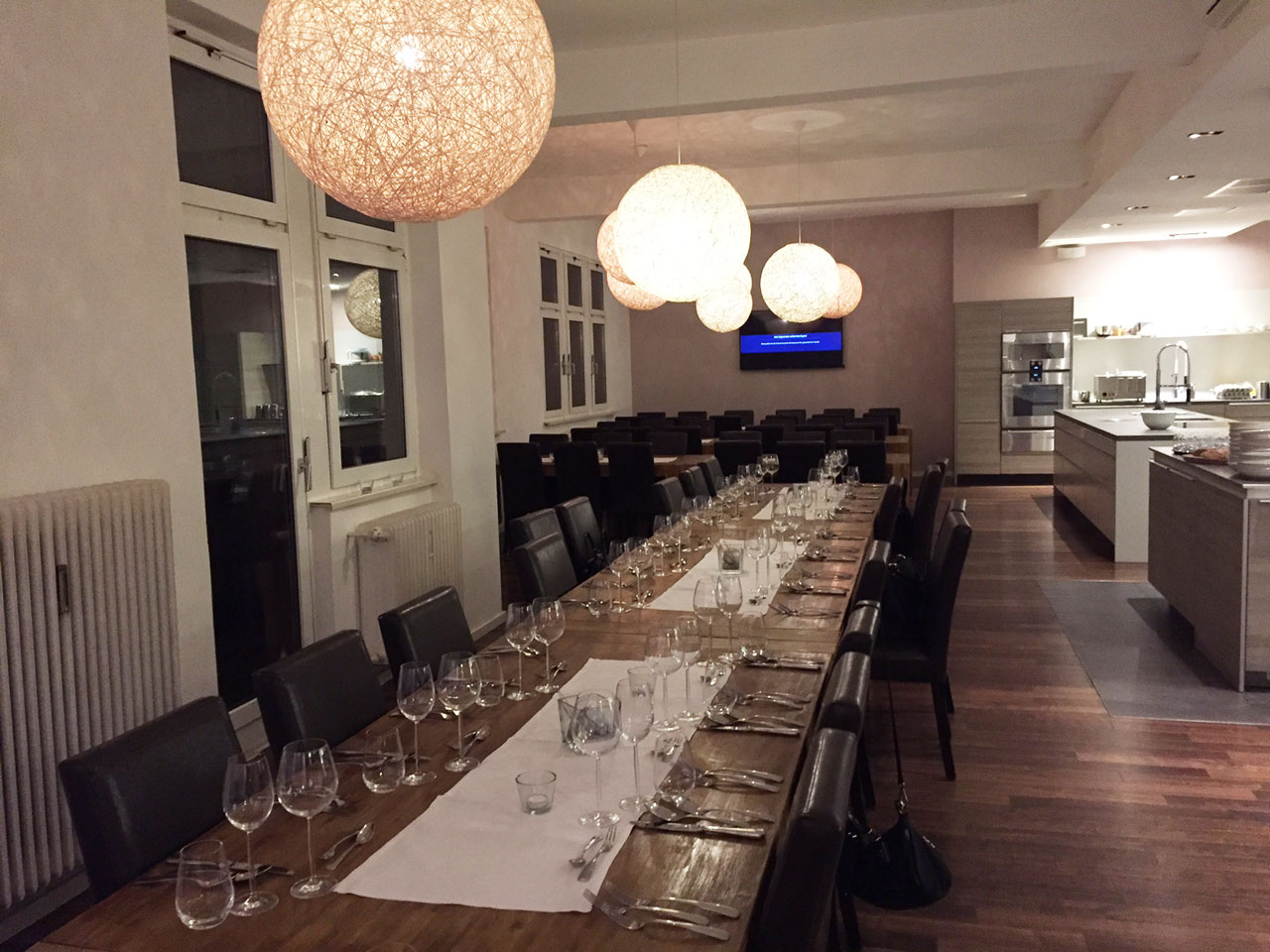